NEW VIDEO with yours truely on Lap Steel Guitar from Go Jimmy Go performance of "The Girl with the Fishbowl Eyes" at their final concert: Go Jimmy Go "A Hui Hou" 20th Anniversary & Farewell Show @ The Republik (Honolulu, Hawai'i)

Join me in my adventures in music,

A large part of my musical mission has been to share the untold stories of Hawaiian Music History, and to perpetuate the fragile cultural art form of The Hawaiian Steel Guitar through performance, education, recordings and construction of lap steels.

As a gift to you please accept my Hawaiian Steel Guitar album from 2003 "Evening In The Islands", an all acoustic string band album paying tribute to the Hawaiian Music pioneers. Performed on a 1928 National Resophonic Tricone squareneck steel guitar, this album also features legendary Hawaiian `ukulele jazz musician Bill Tapia on the track "Mood Indigo". 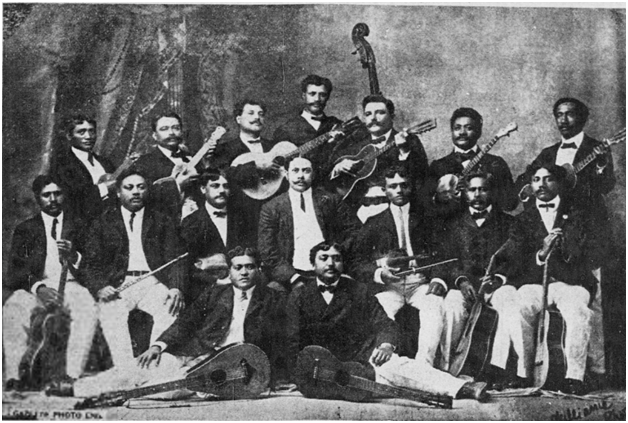 Prior to the 20th century in the mid to late 1800’s Hawaiian music was evolving from The Royal Hawaiian Marching Band format under Henry Berger into that of smaller singing string bands with emphasis prominently on guitars, accompanied by `ukuleles, banjo, mandolins, violins and sometimes flute.  These stringed instruments became one of the most important turning points in Hawaiian music, freeing the lips from wind and brass instruments of current and former members of the Royal Hawaiian Band and enabling the development of a new harmonized singing and string band style that would sweep the islands and influences American music by becoming the first world music craze of the 20th century. The musicians pictured here, the reorganized Kawaihau Glee Club, (Hui Himeni Kawaihau), are little known but are some of the most important musicians in Hawaiian Music History. Over time my mission is to share the true and forgotten histories of Hawaiian music on social media and eventually in a book to keep it alive for future generations.  After 25+ years of digging, researching and hording the golden nuggets of Hawaiian music, it’s time to share the forgotten past of the Pioneers and Troubadours of 19th century Hawaiian music with you and other historians and research enthusiasts.  Join me in my journey as I roll out my blog in 2019. Mahalo

The Essential Resophonics, Eveneing In The Islands Vol.1
"Giles' steel guitar is the lead instrument and the sweetest of the sweet. The Resophonics are indeed essential listening for anyone who enjoys nahenahe Hawaiian music sweetened with an occasional dash of jazz."
John Berger, Honolulu Star-Bulletin.

"Buck Giles is on to something, transporting the listener to pre-World War II, pre-statehood, simpler times in Hawai'i...the disc plays like a time capsule discovery, with almost mythic implications of a lost generation of sound. As such, it's a wonderful mood-evoking discovery.
Wayne Harada, Honolulu Advertiser.